Having arrived at Château de Pondres late last night after 36 hours of traveling I had planned to go for a long walk today. Heavy rain set in which put paid to that plan. Château de Pondres was once a castle built way back; no-one seems to be quite sure when as the records were destroyed during the French Revolution. Someone has bought it recently and is turning it into a hotel. With ten rooms and another ten being constructed in the old stables down the paddock and some apartments it seems like a classic case of “How does one make a small fortune out of owning a castle? Start with a large one!” With its metre-plus thick walls, grand stair case and stone arched roof in the restaurant, it’s quite impressive.

With the weather almost fine I set off down through the grounds of the castle in search of an old railway line. I had been told this had been turned into a cycleway and had walked part of it near Sommieres last year.  Finding it near a motocross course I turned right along the old line. The rails and sleepers had been removed but the thick gravel the sleepers lay on still remained. Heading north I soon discovered that this part of the line was definitely not a cycleway. Overgrown in places with blackberries and other foliage, I think it’s still in the planning stage.

Well built bridges took traffic over the line. In the ten kms I walked on the old line there was only one level crossing and that was by a station. Eventually I arrived at a town called Vic-Le-Fesq. As I strolled through the tidy, but deserted, streets I came across a lady getting into her car. With my best “bonjour” I tried to ask if there was a cafe in town; she didn’t have a clue what I was saying so I smiled and she burst out laughing, got in her car and left. Wandering the streets I eventually found a couple sitting outside a shop drinking coffee. With the help of google translate I managed a cup of coffee and a bit of a chat before strolling back, this time via the forest and roads to the castle.

We spent the evening dining at a rather nice restaurant in Sommieres which is one of the of the nicest towns in the area (and which I have written about previously).

I took a dive north to Anduze, a cute little town set in between some hills. Following the GPS I ended up some distance down a one way street but although I was the only car on the road, as I reached an intersection front on to an old policeman in his car, it became clear I was going the wrong way. Now I could have just turned left and got out of there but Mr Plod, who had wound down his window and given me, I presume, a good dressing down in French – to which I responded with a smile “bonjour” and “no french” – insisted through sign language that I back up the several hundred metres of street I had come the wrong way down.

After a stroll around part of the town I headed to the city of Ales. Driving through what appeared to be an uninspiring city I headed into the hills following winding roads through valleys and up into hills and back down into valleys, making for an interesting and enjoyable drive.

Today at the end of her meetings Sylvia heads to Shanghai.  I headed out to look at the Colosseum at Nimes. Built around AD70 it’s been through a few battles, rebuilds and changes. Nowadays it is used for rock concerts and a couple of bullfights a year. Built of concrete and nowadays seating around 22,000 people it’s quite impressive. There are also good views of the city from the top. 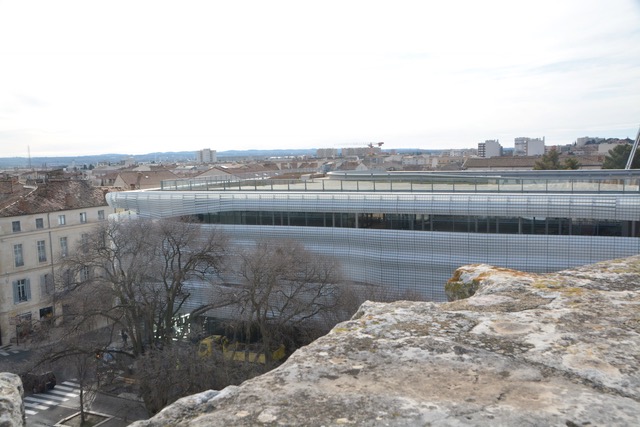 A new road and a not up to date GPS in the rental car meant I missed the off ramp on the motorway to the airport in Montpellier, heading south instead towards Spain. It was another 40kms before there was another off ramp. Luckily I had time to spare as I still made the Montpellier to London flight.  Arriving in London I headed into Westminster to stay with friends, Chris and Haley.

I took a stroll over to Clapham to visit cousin Molly and her husband Murray. We enjoyed a long lunch at a local restaurant. Both now retired, Murray fills his time in as chairman of the local tennis club.

I took a different route on the way beck to Westminster. It is really interesting to see how much the areas surrounding London city centre have improved over the past 20 years. Terraced houses have been restored and are nicely painted, streets are generally clean and free from rubbish, and parks are tidy and well kept.

After dinner with Chris, Haley and son Callum we headed out to check out a couple of local bars, of which there are many just a short walk from their house. This was followed by a stroll just across the road for a photo of in front of the Queen’s place. Not too many people around at midnight.

We caught a bus over to the Tower of London. Although I have visited a couple of times before it is always on interesting place to go back to. At this time of year the guards wear a bluish coloured winter uniform rather than the bright red ones we are familiar with.

When I visited in 1984 I recalled the main tower being full of armour, swords and guns etc. There were rack after rack of them. Now it is more just glass display cases with a few items displayed. I asked an old staff member what had happened to all the old weapons. He told me that in the early nineties they had been moved to the Leeds armoury.

As part of a quiet relaxing day we took a look through the London museum. This place is impressive with a large collection of artefacts from all over the world. Particularly impressive is the mummy area. Here they have taken MRI scans of the corpses, still in there caskets and have often been able to identify how they died. One guy had been found preserved in the desert sand and was encased in a vacuole sealed glass case in the same state as discovered after lying around in the sand for around 5000 years having died form a spear strike to the back of his shoulder.

Callum and I headed over to Pancras Station and jumped a train for Leeds. Leaving bang on time, but not as fast as the European trains (reaching just under 200kph) we were there in around three hours. A short stroll through what was once an industrial area alongside the river Aire revealed well-restored, mostly brick buildings, now providing residential accommodation.

The Leeds Armoury Museum is very well done with lots of weapons armour and associated articles on display.

First we headed into a lecture where one of the curators had a range of firearms laid out on a table. He took us through the the accidental invention of gun powder by the Chinese around AD 800 (they were actually trying to make an eternal medicine). The recipe was kept secret for a number of years as it gave a tremendous advantage to those possessing it for use in canons etc. In the 1300’s the recipe was sold to the Europeans and along came canons and hand cannons. In the 1600’s the matchlock appeared with a range of 75 yards. The flintlock appeared in the late 1700’s. This is where the “flash in the pan” saying came from as one in five shots didn’t work. After each shot was fired the operator had to put his mouth over the barrel and blow to clear any hot bits of powder out before reloading. Sometimes in the heat of battle there would just be a flash in the pan not picked up by the operator. As he whipped his lips around the muzzle “bang”. Rifling was invented and the projectile changed from a ball to a bullet through the 1800’s with paper cartridges, containing both powder and bullet, being loaded from the muzzle until in the later part of the 1800’s breach loaders evolved. Black powder created a huge amount of smoke, hence the troops wearing bright coloured uniforms into battle.

From there we toured the 5 floors of the museum, which included a crossbow shooting area.

As we were leaving we spotted what looked like a few guns in the stairwell. The five-storey stairwell is lined with weapons with a series of mirrors reflecting them for those that can’t look up.

I took the train west to Malmesbury to visit Alexander, whom I had met at the shot show last year. Alexander sells military type guns to various people around the world and has turned the old farm buildings into his office and storage area. After a good catch up, lunch and a bit of gun  talk I trained back to London.

I took a Virgin Atlantic flight from  London to Washington DC. As I walked into the terminal I was greeted by a friendly woman with a big smile who directed me to the check-in where another friendly person sorted the check-in. On the aircraft all the crew were friendly, smiling, attentive and keen to assist. They looked happy in their work. Maybe the big chief at Air NZ should take a flight with them so he could learn a thing or two.

I stayed with Mike and Paula in Virginia and had a good catch up enjoying a great meal at a great local Mexican Restaurant.