With Roger busy in the South Island of New Zealand over the Easter break I decided to invite my Mum, Rosie, and her partner, Lardy, to join me in Vietnam for a long weekend. Given the limited time we had we decided to start in Hanoi and visit Halong Bay.

Mum and Lardy flew in via Singapore from New Zealand arriving on Thursday morning. I had been working in South Korea all week and flew in from Seoul arriving Thursday evening…

After a leisurely breakfast in the very comfortable Sofitel Metropole Hotel, which was built in 1901, we were met by our guide, Hai, to start our Hanoi sightseeing. We headed first to the square where Ho Chi Minh’s Tomb is, opposite the government buildings. It was extremely hot and humid even mid-morning and it was a relief to get into the park-like garden area surrounding the government buildings and the historic house of Ho Chi Minh. There were thousands of local and Chinese tourists thronging the place. It has been very well maintained and even some of his cars are on display including a Russian Zil. Apparently people wanted him to live in the large building that now operates as the presidential palace but he opted to stay in a much more humble bungalow before moving, on I think his 64th birthday, into a gorgeous, traditional wooden stilt home that was built for him. 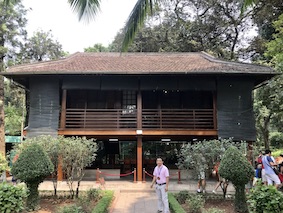 After stopping in an air-conditioned gallery where we saw disabled women making incredible woven ‘paintings’ we wandered through parts of the old city – far from the madding crowds. Land is very expensive so the homes are tiny and narrow but built 4-5 storeys high. We meandered down tiny little alleyways between the buildings getting glimpses into many of the houses and dodging the scooters as they rode past.

We stopped briefly for a traditional Vietnamese lunch of pork meatballs and rice noodles in a sweet and sour sauce before heading off again for a cyclo tour of the old city area. Despite the crazy traffic this was a remarkably relaxing way to see the different sights in the city. Scooters dart along everywhere, some with 3-4 people on. At least most are wearing some sort of basic plastic helmet but many of the riders are talking on their phones or texting, and the children rarely have any helmets on. Like in most Asian cities people carry incredibly big loads on these scooters. But generally the traffic is very courteous. If you want to cross the road just walk slowly across and the traffic seems to go around you. It was a bit the same on the cyclos – it could look a bit daunting to have cars, scooters, buses and the like all converging on us as we crossed an intersection but they seemed to part to let us through.

i loved the various stalls selling fresh fruits and vegetables, often off the back of bikes just parked on the footpath with the owner resting (and sometimes sleeping) in a shaded area not too far away.  It was quite tempting to just reach out and grab a piece of fruit as we were cycled slowly past.

Eventually we arrived at the Hanoi Hilton, originally built as a prison to hold dissidents during the French rule and later housing over 600 US pilots shot down during the Vietnam War. The focus of the exhibits was on the egregious conditions the Vietnamese rebels were held in during French rule, including the guillotine area where several were executed. The exhibits on the US pilots showed a lot more of the positive photos taken when the Red Cross was visiting etc. I cannot imagine what it must have been like to be kept in these conditions. Many of the pilots were incarcerated there for 6-8 years, a large building with no air-conditioning in extremely hot conditions. Having said that – I do think they were probably better kept than the Vietnamese under the French.

Our last stop was Confuscious Temple, which is also a University. Outside were row after row of turtle statues, representing major scholars over the years. At 37+ degrees with 90% humidity, by this stage we were all more than ready to head back to the hotel for a break and to cool down.

In the evening we wandered down to the West Lake area, which is closed off to traffic in the weekends. Many people congregate along the shores of the lake, line-dancing, playing a form of hacky-sack with a funny thing that looks like a cross between a shuttlecock and a cats toy, and socialising. The lights around the lake are beautiful, particularly the red bridge leading to one of the temples.

We enjoyed dim sum for dinner at a Cantonese restaurant near the lake before returning to the hotel bar for a refreshing G&T to round out the evening,

This morning Hai picked us up and we drove the ~2.5 hours to Halong Bay. The roads around Hanoi are remarkably good and smooth making the trip fairly easy, especially once we got out of the city proper. There is a lot of development underway – at one stage we passed an area with about 50 cranes building large apartment blocks in what will become a satellite city. (Apologies for the quality of some of the photographs – not that easy to take a good picture out of a moving van).

The ground must be incredibly fertile. All along the road we passed field after field, initially orchards with various fruit trees (lychees, mangoes) as well as banana palms and pineapples; later field after field of rice, all dotted with shrines and cemeteries. There were also the odd duck farm, dotted about with white ducks, that have obviously had their wings clipped so they cannot fly.

As we got nearer to Halong Bay we started to come across fishing areas and oyster farms – sticks protruding seemingly at random from the mudflats and areas all netted off with little huts (like mai mai’s) Jutting above the water, apparently for shelter from storms.

We stopped at a pearl farm and had an interesting tour, learning how pearls are made. I can understand better now why they are so expensive given the high failure rate. It is quite a delicate process. A small piece of the muscle that makes the nacre on the inside of the shell is harvested from a live oyster. This is treated with antibiotics and along with a small core, made from crushed up shell, is placed inside the ovary of another live oyster. The oyster is then put in a frame and kept for 3-5 years. They are x-rayed from time to time to check that the pearl is till growing. Only about 30% actually take and of those less than 10% make really high grade pearls. There was of course the obligatory wander through the show rooms afterwards but the tour was very interesting and well worth it.

Eventually we arrived at the dock where row after row of boats waited for their guests to arrive. We boarded our junk, Legend 6, to be met by Duc, our guide and butler for the next 24 hours or so, who showed us our cabins and the layout of the boat. We were soon underway heading for route 4 – the furthest of the four routes the boats are assigned to avoid over-crowding. We enjoyed lunch while underway then rested on our shaded balconies for the rest of the trip enjoying the incredible scenery (including the many ships anchored and disgorging their cargo). We had the boat to ourselves, apart from the crew of eight who were all eager to please.

Halong Bay is as stunning as the photos I had seen. It covers an area of 1,553 square kilometres and contains 1969 islands and islets. Eventually we arrived at our first destination, a large floating fishing village. We were taken to the floating reception area where we boarded a sampan to be rowed around the village. We were each passed a Vietnamese hat, which resulted in a fair amount of hilarity. The village itself houses about 300 in around 25 small houses. There is also a communal area where they can gather for meetings etc. Most of the houses have dogs, which seem to be comfortable running around on the narrow pathways connecting the houses. It was a relaxing and pleasant experience and with the light breeze we were able to get a little respite from the heat.

After returning to our boat we motored to a sheltered spot for the night. There were a few other boats moored nearby and several people kayaking which made for a pleasant backdrop. The sunset was stunning and we enjoyed drinks on the deck. I have to admit that we really missed Roger – even between the three of us we had trouble finishing off one bottle of wine over the course of the evening.

Just before dinner Duc gave us a lesson in making Vietnamese spring rolls, which were then served up along with several other dishes for dinner. There was certainly no shortage of food on board! After dinner we tried out hand at squid fishing, hanging a bamboo pole with a lure on the end of a piece of string about 8 metres long out the window or door of the boat and jigging it up and down. Only Mum was successful, hauling up one medium sized squid that squirted lots of black ink as it was dragged into the boat.

After a restful night we were up fairly early with the boat getting underway just after 6:30 to take us to one of the 72 caves in Halong Bay. Mum and I headed off with Duc to climb the steps up to the cave while Lardy stayed on shore and watched the boat loads of people who arrived after us. I am very grateful for the early start. I think we were the second group to arrive so had the opportunity to experience the cave in relative quiet. As we were making our way down it seemed hordes of people were arriving.

Back on board Tae gave me a tai chi lesson and then proceeded to give me a “massage” which turned out to be vigorously rubbing my head. He was adamant that he wanted to massage my eyes as well and I reluctantly agreed. This involved him basically rubbing his hands together and then pressing them firmly against my eyes. I can’t say I’d be in a hurry to do it again!

After breakfast we motored back to dock. Being a holiday weekend there were thousands of boats, some heading in and others heading out, while barges crossed the lines and it was interesting to see how they all avoided hitting each other. Hai met us and we were soon back in our hotel in Hanoi where we all took the opportunity for a quiet afternoon.

In the evening we again headed down to the West Lake area. There were even more people out and about with a couple of bands playing, kids driving around in small cars and a general fun and vibrant atmosphere. We thoroughly enjoyed the stroll around the lake and the people watching.

4 thoughts on “Easter in Hanoi and Halong Bay (Sylvia)”