Chris dropped me off at Tampa where I started the journey to Amarillo via Dallas. At Dallas there was a line-up of small E80 twin tail engine jets that feed the small cities. Arriving in Amarillo I discovered it is not only famous for the song, but is also the home town of Colonel Rick Husband, Mission Commander of the Space Shuttle Columba which disintegrated on re-entry in February 2003. His statue stands with pride in the terminal building. 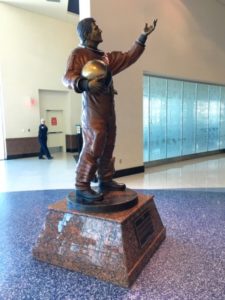 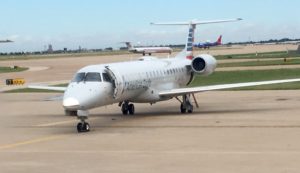 Hiring a car I headed northeast. The land here is flat – in fact dead-flat. A few miles out of town I stopped the car and got out to look around. One can see the horizon in every direction. The last time I saw this was in the Kalahari Desert in Botswana.

A train rolled down the track towards me, stacked two storeys with containers. It was so long I couldn’t see the other end. I am not a train spotter but I couldn’t resist filming this one going past. Speeding along at around sixty miles per hour it took over one and a half minutes to pass by. That’s a mile and a half of train!

Everything is big around here. Huge green paddocks stretch out on each side of the road. I was expecting a desert but saw instead large, green, fertile pastures, some with irrigation. Hundreds of wind turbines cluttered the land twenty miles out of town. 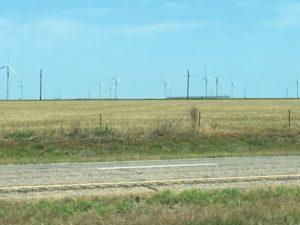 An hour or so up the road the land started to gain a bit of form with some small hills and gullies. This is oil, gas and cattle country.

I am privileged to have been invited up here by Todd, the founder and chief instructor of Accuracy 1st. Todd is a specialist in long range rifle shooting. In conjunction with Kestrel Wind meters he has helped to develop a ballistic programme to calculate how to make long shots.

I pull off the main road onto a dirt road and the GPS soon tells me I have arrived – paddocks all around not a house in site. Heading down a hill I come to a ford. Wading in to check the depth of the brown water it’s pretty clear this little ford will not make it through. Back up the road I find a house and am greeted by Todd’s wife Shannon.

Their son Will runs me up to the 360 degree range. On the ground are a group of US army marksmen who are here training. The firing points are on a hill top which allows the team to move to different positions and calculate the wind at different angles. The close targets from 200m to 4 or sometimes 500m are  a 12″ steel disc, beyond that out to 2000m they are generally a 12″ disc with a square steep plate about 16″ wide below them. When hit a rewarding ding travels back to the shooter. Long rang shooting is a combination of science and skill. 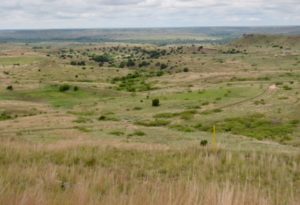 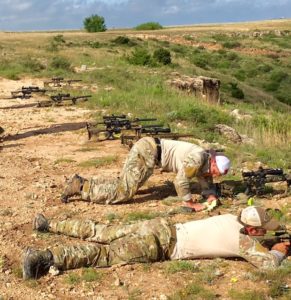 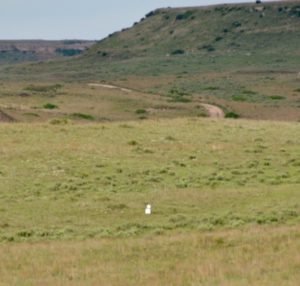 Quite quickly the day is over and I head into the local town of Canadian and book into a hotel for the week.

The next morning we settled into a house down the road from the ranges for lectures by Todd. Kestrel wind meters in hand Todd takes us through the process of entering the data. He knows this instrument so well that he doesn’t even need one in his hand to talk us through it.

He talks about truing the gun. For a 7.62 rifle: zero at 100m then another zero at 700 before the bullet goes transonic – make adjustments. Another zero is done at 1100m. By making adjustments to the zero the kestrel adjusts the ballistics to the flight of the bullet (algorithm) so that the bullet path is accurate in 10m intervals to over 1000m.

We head out to another range and put into practice what we have learnt. We shoot targets from 300m working our way out to just over 1000m. The la Rue 7.62 semi auto rifle Todd has loaned me has a 3 to 25 power Nightforce Scope on it with a trimmer three reticule (cross hair). This has graduated lines running down and out to the sides to assist in calculating the wind.

At one stage we are buzzed by a very fast aeroplane. Sometime later Eddie, the pilot, complete with Stetson, turns up at the range. 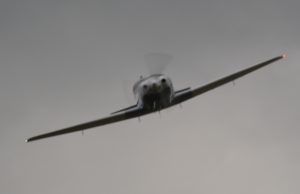 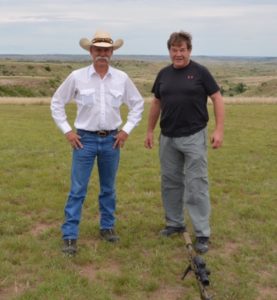 That night back in town I front up at the Stumbling Goat Saloon for dinner. Steve the barman tells me that pizza is half price tonight. “I think I will order a small one” I say. “No no” he says, “you’ll need a big one”. A big one I ordered. When it arrived it was huge! I looked at the 130kg plus Steve and realised why he had recommended the big one.

Back to the lecture room the next day, as it rained all day, learning how to judge range to the target by sizing objects on the scope reticule. Todd is a master at arithmetic, instructing us in how to calculate wind speed at an angle using short formulae.  Then it’s back out to do some more practice.

That night I headed to the supermarket to buy some beer for the team. “Excuse me where is the beer department?” “We don’t have one came the reply!!” “What?” “Yea man, Hemphill is a dry county, you could drive 20 miles up to the next county and get some but they are closed!”

I headed across to the Goat and ordered a drink. I commented to the barman about the dry county. “Yea and it’s going to stay that way because the mayor owns this place so it works well for him”.

The next day we sat out the rain in lectures heading out mid-afternoon to practice. There are lots of experts passing through here testing out and getting Todd’s advice on developing their new technology. We got to try out some pretty cool stuff, after which I got invited to a BBQ at the training centre to meet a whole bunch of people up there testing different shooting aid devices. 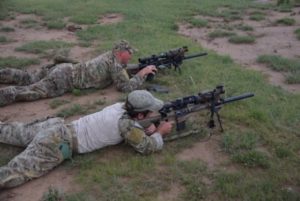 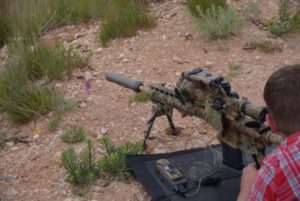 Friday morning we did a shoot with no aids having to judge the range off the reticule (milling) and trying to work out the wind from the mirage and movement of grass etc. I need lots more practice at that.

All too soon it was time to drive back to Amarillo. It had been a great week. A big thank you to Todd and Shannon for their hospitality, and to the US Army marksmen for welcoming me into their group while sharing lots of their skills and humour.

It seemed like in no time at all, after the flight over miles of flat country, Sylvia was there to meet me at the airport gate in Houston to catch our flight back to NZ. 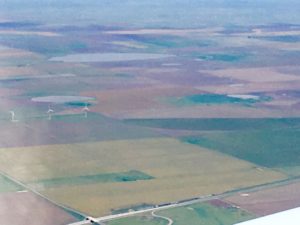 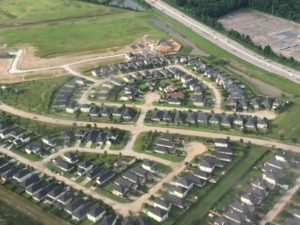 2 thoughts on “A Long Shot in Texas”