Having arrived form Portland at 8am we had to wait for our room at the Apollo Hotel in Amsterdam to be ready. The place is a bit run down and the service even worse than one gets in France. The food, however, is great and the view from the deck, where four canals meet, is very relaxing. There is a constant passing of boats of all shapes and sizes. Sylvia is here for a conference involving nearly 400 Mars Petcare and Royal Canin senior people from around the world. They are also occupying another hotel near by.

In the early afternoon we took a stroll to Cafe Wildschut where we caught up with Mila and Anne who I had met in Belize a couple of years ago while traveling with AJ and Cam. Both have good jobs and are enjoying their homeland.

Was a fairly quiet day as Sylvia had to prepare for a speech at the conference. Later in the day we sat on the deck at the hotel catching up with some of her colleagues.

Having somehow injured my ankle last week I wasn’t up to going for a long  stroll. Later in the day I caught the train to Roermond in the southeast of Holland. Famous for its expensive shops, lakes and beaches, I had planned to go for a quick look around. As I left the station it rained really really hard, to the point, I heard later in the day, that houses were flooded in the area. Just by chance there happened to be a row of bars and cafes across the square from the station. Cafe De Tramhalte had not long been purchased by Vincent and his dad. Vincent, who was behind the bar, gave me a good rundown on the area. They get lots of people coming from Germany (the border is only 10km away) to shop and party. The bars open until 1 or 2 in the morning on week nights and the others are open until 5am in the weekends. Vincent explained how they shut at 2 in the weekend as there are too many fights after that hour. He also said living upstairs is quite interesting as often he will hear fighting in the early hours, look out the window to see what looks like a movie scene with glasses and bottles flying through the air amongst the brawling crowd.

Too soon, as in two beers later, it was time to catch the train back north. This time to S-Hertogenbosch, where my friends Rob and Femke live. I visited them a couple of years ago and took a trip through the canals here, which in a lot of places run under peoples houses. With its old style buildings and narrow streets and alleys – all well kept, it has got to be one of the nicest towns I have visited in this part of the world.

Leaving the station I headed once again for a bar to wait for Femke to finish work. The rain seems to be following me north. Femke eventually arrived, armed with umbrella, so we wandered through the streets to a local bar to wait for Rob, who was caught in traffic some distance away.

When Rob arrived we enjoyed a good catch up. Rob recently retired from the Marines and is now working in the security field. They are both excited as soon they are moving into a new house they are having built. All too soon the evening was over and we strolled back to the station where they bid me goodbye.

With ankle still swollen I had a restful morning, I discovered there were boats for hire not far from the hotel so after lunch I headed down to hire one. Mathilde was on duty renting the boats at 80e for 3 hours, max 6 people. I paid up, jumped aboard and was shown the recommended route to take and how to drive the boat. “To go forward push the lever backwards to full throttle and the opposite to go backwards” she said. As I pulled away from the jetty in this electric boat my vision of speeding through the Amsterdam canals James Bond style were well and truly dashed! I could walk faster. 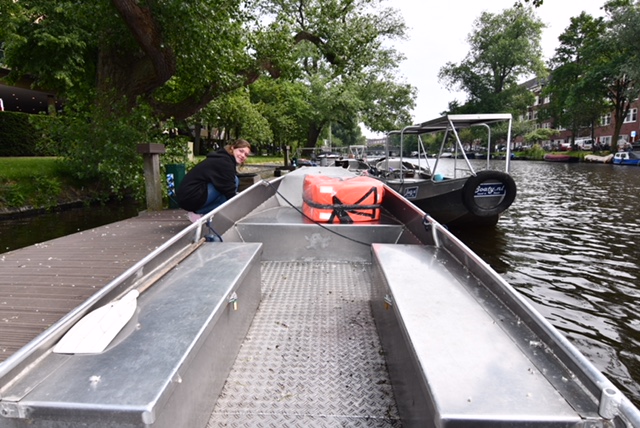 I headed towards the Amstel Canal which meets the Amstel river. A left turn took me towards the city centre. There are some quite big house boats moored on each side of the river, many with lots of land and flowers. They all seem to sit on what I presume is a floating concrete pad. Quite large boats and barges headed up and down the river. Mathilde had made made it very clear that the rules are “give way to bigger boats”. Lots of people hung about on the edge of the canals with the sickly smell of “wacky backy” drifting down from the streets. One of my Dutch friends told me “it’s the tourists that smoke that stuff, most Dutch people are too smart to indulge.” Turning left again I reached the city centre and the canals became quite packed with all sorts of boats. I did even manage to pass one slow pedal boat.

Eventually the tour brought me back past our hotel to the jetty. It is surprising the number of small boats that are tied up to the bank here with rotting covers and have obviously had no use for years.

Rob had suggested I take a look at the National Militair Museum near Soesterberg. I caught the bus to Amstel Station where the very helpful person gave me a print out on how to get there. A train took me to Utrecht. The line ran alongside a canal which had a combination of large freight barges and tourist boats heading along it.

On reaching the station I mounted a bus for the 30 min ride to Soesterberg followed by a km plus walk down a lane and across the old airfield passing a memorial and what had been the German airforce bunker from WWII – no longer accessible, but apparently once a large command post and tunnel complex.

Arriving at the entrance a Leopard Tank greeted me, along with a welcome sign. A good start to a museum!

This airfield is the oldest military one in Europe. Originally a small company was making aircraft here before WWI and went broke so the government took it over in 1913. During WWI Holland was neutral and many fighter pilots from both sides crossed into Dutch airspace to escape their pursuers. As a result they were interred for the rest of the war and Holland ended up with quite a collection of early fighter planes from both sides, helping them develop their aviation industry. In 1940 when the Germans invaded Holland this became a major German airbase. From here many bombing raids were carried out on the UK. The Germans built a large number of bomb proof hangars in the forests on the other side of the airfield, In spite of a massive bombing in 1944, which left the airfield cratered like the surface of the moon, many of these survived but just now one can’t visit them as birds are breeding in the area.

There are a huge range of aircraft, rocket launchers, tanks, artillery guns and machine guns here. Many of the fighter planes are suspended from the ceiling and others parked outside on the tarmac. I was impressed to see a German V1 and V2 rocket suspended on each side of the a spitfire. Interestingly my mother had often talked of seeing the V1 rockets over England while on an anti aircraft battery there during WWII. Later while on a battery in Antwerp she was knocked over by the blast of a V2 rocket that exploded a short distance from their gun emplacements.

Another fighter there was the Gloster Meteor which was the first Dutch Airforce fighter with jet engines, forty of these fighters were lost in training. There were no ejector seats back then.

Amongst the many machine guns there was a Swedish Palmcrantz & Winborge George mounted gun that fired by pulling a bar across the ten barrel chambers. Apparently in 1873 the Dutch army fired 3000 rounds in 3 minutes through this gun, more than many machine gins can achieve today.

Today they were holding a kids National Science Fair finals so lots of entertainment had been set up for the many attendees.

Having run out of time I tried to get an Uber back to the station but “no cars available” was the message. I strolled back to the bus stop and sat talking to a lady called Hanah who was up from south Holland for a job interview at a local brain research facility.

A warning to travellers in Holland about credit cards, or should I say the lack of places that take them. Having set out this morning with only 15e in notes and a few coins, the museum did not take credit cards so that was 14 some, a cup of coffee and I had a couple of euros left when I got to the bus stop. When I left the station this morning I had used the bus card from Amsterdam and was talking to the driver when I got on. As I mounted the bus and tagged the same card I noticed a red light. Asking the driver how much I was caught short. I had used a credit card on the bus in Amsterdam but that was not a go here. The driver said get on the bus you will just get a fine if the inspector gets on. Hanah did offer to help me out but the bus was on the move by then. Drivers had switched during the journey so when I offered some money at the end of the journey the driver shook his head and waved me away.

I have since discovered that credit cards are not widely accepted outside Amsterdam although some restaurants do take them, so carry cash in Holland.

Sylvia finished her meetings just after midday so we hired a couple of bikes and went for a ride around town. We had planned on heading out to the coast but a big thunder storm was forecast and packing wet clothes is not fun. We decided to head towards the city instead. This city is well set up for bikes – it’s flat, (in fact I haven’t seen a hill anywhere I have been in Holland), and there are bike lanes on all main streets. There are more people killed on bikes than in cars in Holland and around 14,000 bikes get fished out of the 100kms of Amsterdam canals every year, along with up to 50 cars. Interestingly most of the bikes here are upright with high handle bars which means the cyclist can see better whats going on around them and car drivers can see the cyclist easier. It’s quite common to see cyclists texting as they ride. If you live here you will own 1.2 bikes and use your bike up to 60% of the time.

We headed in the general direction of downtown ending up in Dam Square, where we stopped and enjoyed a light lunch at one of the many restaurants surrounding the square.

After lunch we headed down to towards the central railway station and turned right, passing the red light district before stopping for a look at the Maritime Museum, a magnificent stone building but the museum itself it not really much. It does have a replica sailing ship and the Royal barge, built by King William in 1818 last used in 1962 and recently restored.

We passed an original windmill and then made our way back to the hotel to pack and catch our flight to Singapore.

5 thoughts on “A Quiet Few Days in Holland”