Landing in New Orleans I picked up a rental car and headed to Baton Rouge on I10 East. I had put Baton Rouge in Google maps. It placed me in a really rough area of the town – one house had razor wire around it and looked like a gang headquarters. As I didn’t have a lot of time to spare I continued on my journey, heading northwest up highway 419 to Pineville, a total journey of just over 350kms. It is dead flat all the way with large cotton fields and some other crops. The road is excellent and very wide with a speed limit of 70mph but the general speed seems to be closer to 80.

Reaching town I called in to see Mike, Joe and Mike, who I had met up in Texas last year. They had said if I was ever in the area to drop in. They are all US Marshals and based at the special operations group headquarters. Mike had gone home sick so Joe took me for a tour of the place showing me lots of interesting things including several shooting ranges.

Pineville has a population of around 14,000. It is only separated from Alexandra (population around 47,000) by the Red River, which is still used as a shipping river, running freight being transported several hundred kilometres up the river. Pineville also hosts a large national guard base where the marshals have their headquarters.

Joe had very kindly offered me a bed for the night so after a rather nice hamburger we headed to his place. Katie, Joe’s wife, was there to greet us.

I hung out with them at the Marshal’s HQ and managed to catch up on a couple of stories between chatting to people. Joe’s boss, Eddie, joined us for lunch at a rather nice place near the river. The home-cooked, southern-style food was very tasty.

On the way to Joe’s place we picked up some steak, which Joe grilled on the BBQ, while Katie whipped up some beans and potatoes, which was all very tasty and enjoyed over a few wines and great conversation.

After dinner we watched Trump give his state of the nation speech, which sparked some interesting comments and conversation.

A little history on the Marshals service: Created by the first congress in the Judiciary Act of 1789, they were given extensive authority to support the federal courts within their judicial districts and carry out lawful orders issued by the judges. Today they are still tasked with supporting the federal courts and chasing down those wanted for federal offences. These guys are dedicated to tracking down and catching the real bad buggers in order to help keep the US citizens safe. There is a really good web site that outlines the history and evolution of the US Marshal service: www.usmarshals.gov

After a good brew of coffee with Joe and Katie I headed off under the clear blue sky, crisscrossed with vapour trails from the many jets in the air, to New Orleans. It’s around -2C here this morning.

I headed down I49 to Lafayette, then east on I 10 east. Crossing the Mississippi River at Baton Rouge I saw what looked like the part of the city I should have visited on the way up. There are lots of trailer houses (transportable) in this part of the world.

East of the Mississippi the road heads over wetlands with some bridges being up to ten miles long, a great feat of engineering. In 1956 President Eisenhower signed the Federal Highway Act to create 41,000miles of “National System of Interstate and Defence Highways”. The primary reason was to evacuate cities in case of atomic attack, move troops around in case of invasion, plus make roads safer and reduce traffic jams. The building of these roads increased productivity throughout the country. Although some of the original ones were never completed there are now over 47,000 miles of interstate which account for 25% of all mileage traveled in the US each year.

Arriving in New Orleans I headed to the National WWII Museum, which Joe had recommended I visit. This turned out to be well worth the visit with several sections. First I went into an auditorium, where a combination of holograms and movie footage, curated by Tom Hanks, took us through the US war story. Next was the Boeing Hall with aircraft including the B17 bomber suspended from the ceiling. To one side there was a mock-up of the USS Tang submarine, which sunk 33 ships before being sunk. In the mock-up one experiences its last action and the sinking. 5 crew survived to be captured and tortured by the Japs.

There is a section dedicated to the road to Berlin and another on the road to Tokyo plus another general section. These are all really well done with lots of footage from the war playing along with stories from various individuals.

The day over, I checked into a hotel complete with record player and a a few jazz LPs. A stroll to the French Quarter revealed the towns only surviving cigar bar where I chatted to a few locals and enjoyed a relaxing evening.

I headed out for a stroll around the town which is gearing up for Mardi Gras. Bourbon Street is closed off in places as the road is prepared for the madness. I was here with a mate, Ross, for a printing trade show in the late nineties while the festival was on. Bourbon street was where it all happened. Packed with people, plastic cups of beer in hand, they partied hard while people threw strings of beads from the balconies to women each time they took off an article of clothing. We visited Pat O’Brien’s bar where the ceiling was lined with steins and pianists sat at two copper clad pianos playing anything people requested. The town doesn’t seem to have changed much since then apart from some work in progress to tidy up the water front. 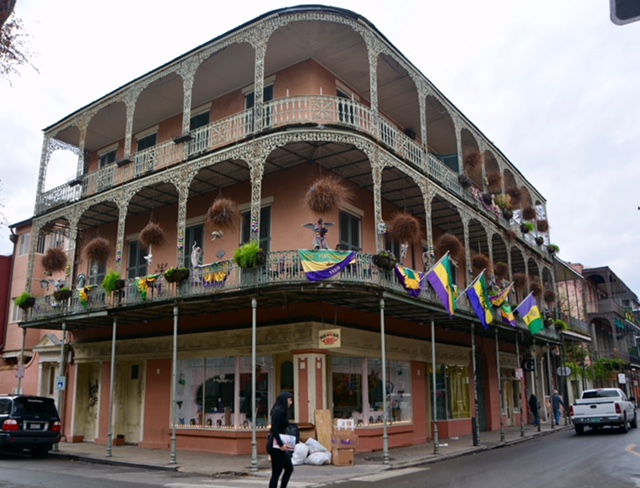 All too soon it was time to head to the airport for the flight to Houston and then on to Auckland and then Christchurch to attend Sylvia’s niece Joanna’s 21st. Joanna had accomapnied us in Botswana last year.

One thought on “It’s pretty flat in Louisanna”