A 50 minute train ride places me in Antwerp, about 45kms north of Brussels. My mother was stationed here in the latter part of WWII on an anti aircraft battery. She had always spoken highly of the place. At her seventieth birthday she told us a story of being strafed with machine gun fire by a Messerschmitt. The plane was so low that she could see the face of the pilot. She suddenly had the realisation that over the last four years of being in the anti aircraft batteries in England there were people in the planes they were shooting at!!

As I wandered the streets towards the river buildings adorned with gold spires contained shops. 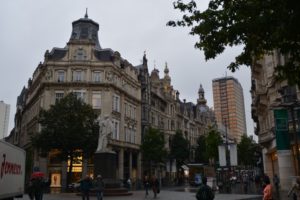 Down toward the river is  the Cathedral of our lady, O-l-Vrouwekathedraal. Started in 1352 with the first stage of construction finished in 1521 it has never been completed. There are statues out the front of men chiseling stone. A green bike is parked in alongside  in case they want to head home!!

Squares are surrounded by bars and cafes, and adorned by amazing buildings.

Statues are prominent in both squares and streets. Reaching the river a viewing area allowed a clear view.

Next was a castle and a little further along another almost castle building.

Then I spotted a large copper-coloured modern building which had to be a must see. Negotiating my way around and over some major road works I was eventually at its door.

What I found inside was, to say the least, amazing. I had stumbled across the Museum aan de Stroom. Each floor contained archeological exhibits superbly displayed from all parts of the world. The lighting was not bright but done in such a way that photos came out with no flash. It was indeed a walk back through time.   On each floor one looks out over the city through wavy floor to ceiling glass.

Copper-coloured stone is on the walls and ceiling on each landing. Each floor contained a range of exhibits from dunnies right back to an Egyptian Mummy from 1000BC.

From the roof, between showers, there is a great view of the city.

After taking in the museum I strolled through the streets back to the station for the short ride back to Brussels.

At breakfast a couple of days ago, Anne, a colleague of Sylvia’s had suggested a visit to Ghent. Arriving by train about 40k west of Brussels I headed south out of the station through streets lined with nice old buildings, eventually reaching a large canal, or maybe river (it’s a bit hard to know which is which in this part of the world). It is always amusing seeing the top of a boat moving along what from a distance looks like a road.

I followed the river around the edge of the city on a wide bike path next to a motorway.

Lots of little canals run off the main river with pleasure craft moored at the sides. Coming to a large straight canal, which looked like it had been purpose built for rowing, I followed it back into the city.

Crows picked mussels off the stone edge and dropped them on the road to break them open.

Heading into the city centre I noticed most of the streets were curved showing off the stylish old buildings and canals running through the town.

Arriving in the city centre I was blown away by the number of large cathedral-like churches. It was like a few hundred years ago they had a major church building competition. There are three Catholic ones within a couple of hundred metres.

All the buildings around the square are unique.

Just down the road is the Castle of the Counts. Dating back to the twelfth century it is still moated on one side and is made up of huge stone rooms, spiral staircases and well designed battlements around the outer walls.

As with most castles at one point in time it was a prison and place of torture.

The embattlements even have long drop dunnies into the moat.

From the top turrets there are great views across the city and its many spires. These are just a few I photographed from one spot.

Visit over, I followed the winding streets back to the station for the trip to the Brussels airport for our flight to Tokyo. Security is still intense at railway stations and the airport with the ever-present soldiers patrolling and red shirted security guards mainly standing around in groups talking.

One thought on “A Tale of Two (Belgian) Cities”