It was beautifully sunny when we woke up this morning and it seemed the wind had died down a bit – at least it did until we decided to wander across the road to look at the pseudo craters a bit more closely. Still definitely windy! The pseudo craters are formed when hot lava meets a lake or pond and there were several perfectly formed ones just over the road from the hotel.

We headed off, stopping briefly at Godafoss, a large horseshoe shaped waterfall. We have seen so many waterfalls on this trip with snowmelt water cascading down cliffs everywhere, sometimes in thin trickles and others in mini-torrents. Godafoss was one of the few we have seen where the water was not crystal clear.

We carried on along Route 1, taking a wee detour on Route 83 to visit Laufas, a well-preserved 19th century farm that has been developed as a museum. I loved exploring the turf houses complete with numerous period belongings. I was particularly taken with the beds which reminded me of the seven dwarf’s beds from Snowhite – particularly as they were in one of the upstairs rooms.

View from window in the farmhouse.

We had a great chat with a young woman at the café next door who gave me an excellent lesson in the Icelandic language. No wonder I have found it complicated – not only are their 32 letters but even she says the rules on how things are pronounced are not consistent. And to make it even more challenging they have “bendy nouns” – a place or thing has a different name if you are there or if you are going there or leaving there. But at least I can now say Pingvellar (the name of the old Viking parliament place we visited on day 1) properly – and it is nothing like what it looks like – pronounced “thing-vet-lick”.

We carried on through Akureyri, where we stopped briefly at the Aviation museum, and then around Trollaskagi or the Troll Peninsular. This is another stunning peninsular with a number of long tunnels – we went through a 3km single lane tunnel, then a 7km two way, followed nearly immediately by a 4km two way and then later by another slightly shorter single lane one. The single lane ones had plenty of passing bays but still took a lot of focus.

We stopped in Dalvik, a tiny fishing town for some delicious Icelandic fish soup, which always seems to be served with an endless supply of fresh, homemade bread and butter.

We arrived at our hotel in Saudarkrokur fairly early. The hotel itself was in an old 18th century building but our room was in the slightly newer annex next door. The bed was made up beautifully with the towels folded as swans on the end. We decided to head up route 748 to see if we could arrange a trip to Drangey Island for some puffin watching but no luck. Instead we settled for a quick soak in the natural Grettislaug hot pools – pleasantly warm but a bit slimy for my taste.

We had dinner in a small restaurant back in Saudarkrokur, Olafshus, where we tried the Icelandic Country Platter – a mix of foal steak, beef tenderloin and lamb. Despite my misgivings the foal steak was delicious!

As we head west out of Saudarkrokur on Route 744 Sylvia has a different appreciation of the foals grazing on the roadside. Last night we had had a superb meal at Olafshus restaurant which included a very tasty foal steak.

We stopped at Blonduos for a coffee where we met a Utah couple who were touring on a BMW motorbike they had hired.

Continuing south we turned east on to route 50 then 518 to the Hraunfossar Falls. These are not specular but interesting as the water gushes out the side of the volcanic rock into the river forming a spring some 75m long. There is definitely no water shortage in this part of the world.

As we head up the valley we pass numerous farms with their large stock barns. Horses are more prominent than sheep in this area. Like most parts of this country farms seem to be carved out of swampy land with deep ditches running at the sides, ends and sometimes through the middle of the paddocks. Often ditches have been freshly cleaned out and the soil spread over the surrounding land. Ditch diggers have to be the rich guys around here. There are around 4.5 million sheep and 80,000 horses in this land. That’s one horse for every four people.

We head further east onto route 518, a shingle road heading up to the Surtshelli volcanic caves or tunnels stretching over 2kms with periodic openings. You’re supposed to be able to walk most of the way through them. With sharp jagged rock falls inside and icy snow some distance inside them we only did a few hundred meters underground. Sylvia demonstrated her rock climbing skills climbing a 3 m rock face to exit through the first opening. I had to follow.

Our plan was to head south on 550 but a sign told us it was closed. The many shingle roads here are really well maintained and easy to drive. Just now many are being graded I presume in preparation for the summer tourists. We headed west to the coast following it south. Around Hvalfjorour we passed a number of disused but well maintained fuel storage tanks. This area, it turned out, was a large allied naval refuelling base during WWII. There are also remnants of military buildings and gun emplacements around the fjord.

Arriving in Reykjavik we headed to the waterfront for a meal. We tried the tasting dish which included Minke whale. Very tasty it is. For all you “save the whale” folk, minke are a well-managed fishery in and around Iceland and Norway. Even the naturalists on the National Geographic Explorer seemed to agree with their harvesting.

In summary Iceland is a rugged land of intriguing beauty. One can appreciate the effort and hardship people must endure to live here. Even the basic things you see around the country homes such as heavily insulated water pipes and sewerage lines are just a small illustration as to how harsh the winters must be here.

Ever since we arrived in the Arctic I have been on the look-out for puffins and although we saw a few up near Svalbard they were very distant so this morning we had organised a one-hour puffin watching trip around an island in the Reykjavik harbour. There was only one other guest on board the small boat and we departed right on time at 9:30am. Within 15 minutes we were circling the island with many puffins in view, some sitting on the water, others flying and several on land standing in front of their burrows. They used to be hunted here but have been protected for the last 10+ years and seemed pretty comfortable with the boat. Apparently they are still hunted in the north of Iceland. We also saw black guillemots, eider ducks, arctic terns and northern fulmars before heading back to shore bang on 10:30.

We had a quick wander around the harbour – interestingly several of the older houses here are clad in corrugated iron – and stopped at the viking monument along the shore. 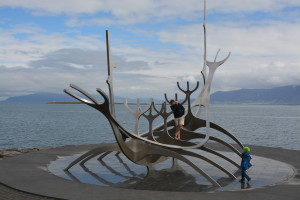 Before flying out to London we did a short circuit of the Reykanes Peninsular to the southwest of Reykjavik. We did a drive-by of the Blue Lagoon, one of Iceland’s most well know tourist spots, but at 60 euro per person for a hot soak I thought it was more than a little ridiculous, despite the beautiful blue water contrasting with the lava landscape. We also passed a couple of large geothermal areas and wandered briefly along the continental divide between the American and the European continental shelves.

After an uneventful flight to London we took the metro to arrive at our Charlotte Street Hotel. We were on the Piccadilly line to Cockfosters, which was announced at each of the 17 stops between the airport and our hotel, much to the amusement of the American woman in the carriage opposite us.

That is the end of the Arctic and Iceland leg of our journey. Several people commented when we were in Iceland and they found out we were from NZ, why have you come here – it is the same back home. From my perspective there are similarities yes – geothermal activity, sheep, lots of coastline etc but also significant differences and I am very glad to have made the trip. Now on to the beginning of the next chapter in our travels….